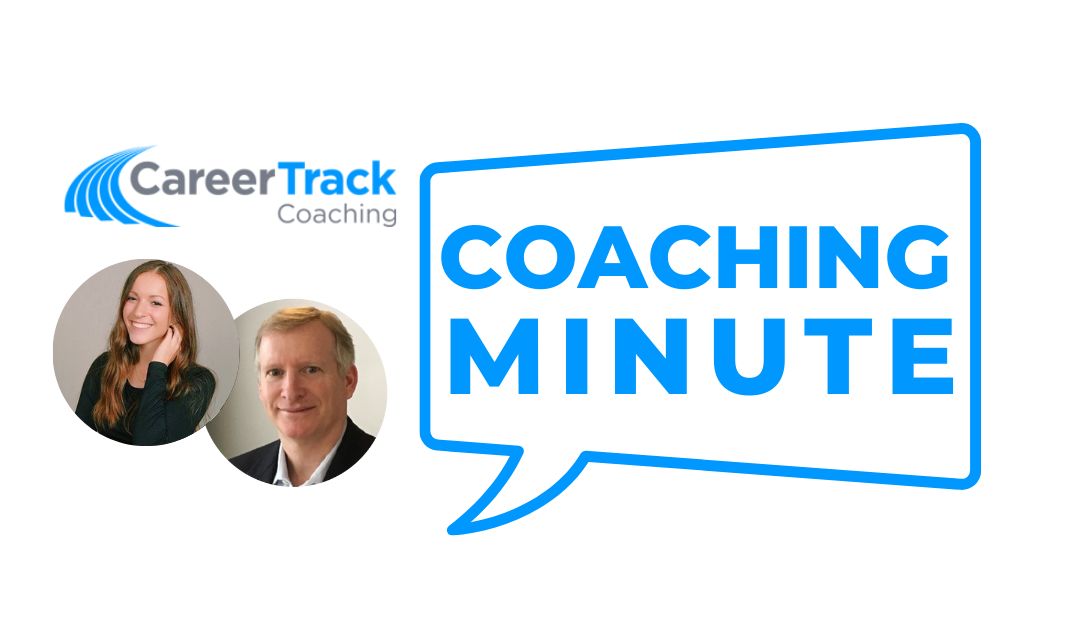 Hi, welcome to career track coaching minute. My name is Jim Frisch where we help our clients find a meaningful career through our coaching process. And once a month we bring in a guest to help us with tips, insights with their career. And today we have a special guest Marlee Nickow. And what makes it special Marley is the first person that we’ve brought in this series. That’s actually been a client. So Marley, welcome.

Thanks for having me. Happy to be here. Awesome.

Awesome,and so Marley since you graduated you’re now was your work that grew pack. And now you’ve been promoted to business development manager. And so if you don’t mind sharing if you can give a little background on your career.

Yeah, absolutely. So, you know, I started off as a business development representative. Really hit the ground running and was able to, you know, get promoted to that next step of business development manager in about nine months. So, to give a little background about the job ultimately, I’m pursuing various sales leads throughout the day. Guiding them through the entire sales cycle. So from a cold outreach to negotiations with, you know, pricing structures to revenue splits between the company and the business owner. I you know, what the goal really, at the end of the day to increase revenue for both Groupon and the small business that I’m working with at that time. Furthermore, you know, serving as the liaison between Groupon and new prospects and being an advisor for them as well, in the long run,

Awesome. Sounds like a great opportunity. And so what we do is we ask just a few questions to give some advice to our clients. And so the first one would be, you know, obviously, you’ve been out. I think you said a little over a year. What advice would you give to a graduate coming into the workforce today?

Yeah, so I could think of a bunch of things. But I would say, one piece of advice that, you know, it’s something I did that got me to kind of where I am very quickly is to be a sponge. You know, whether it’s in this situation with you and I were I was learning how to interview or something like that or you know, whether it be in my new position, just always being curious and absorbing as much new information as you possibly can. And to build on that ask questions and apply what you learned to your position. It will you know, more than not lead to success, lead to career growth that accompany maybe lead you to be prepared for another role in the future. So, just be a sponge and be curious that’s what I would say,

Awesome. Now, I think that’s, that’s some great advice. And the other thing too, we like to ask is you know, if you could share maybe one habit that helped you with your success so far, what do you think that might be?

Yeah, again, multiple things, but you know, I would say that for my job in sales specifically, there’s a lot of moving parts. And you have to be very organized. So my habit is having you know, a few different tools I use for organization. So whether it be list making Google Calendar, Excel, those are my top three. And to dive a little bit deeper, you know, my my work days full of appointments with clients creating deal structures for them sending paperwork for signature, getting contracts back, etc. So, first thing in the morning, you know, typically write out everything I have to get done in order if I if I know it from most important to you know, maybe something I could just get done right at the end of the day. And I’ll use my Google Calendar to you know, send appointment invites to clients and organize my entire day. Because with working from home, kinda have to create your own schedule, which is nice, but if you’re not organized can be tough. And, you know, last call out I would say is using Excel to, again, create those deal structures and monitor all the accounts and clients I have in processes. So if you can create a system and stick to that system, you’ll be well off.

Yeah, you know what, I think you had a great point, meaning as long as you have a system, that’s what’s most important and sounds like you’re you’re doing a great job so far, with what you put in place. And so I think you’ve mentioned too, that there might be another Abbot that you thought might be helpful as well in your Twitter.

Yeah, absolutely. So another one I was thinking about when we were chatting about this was networking. And it sounds simple, but you know you for me, at least I really had to push myself so kind of what allowed me to make such quick strides at Groupon was networking and reaching out to people at the company who weren’t necessarily on my direct team. So between starting my career and then to getting promoted, I made it a priority to you know, speak with at least one new person via zoom each week. You know, I touched on the working from home environment and in that environment, it’s just a lot more difficult to, you know, meet new people and get to know others who aren’t on your direct team who aren’t teammates who aren’t your manager. So, by doing this, I was actually really able to get my name out there and even more important create new friendships and and work relationships. And ultimately, I would say, having people in your corner is extremely important and, you know, that can really be done through setting up those meetings and just meeting new people outside of your scope, and given org

And you know, what I remember you did a great job networking to find a job and then it just once you get that skill, then bringing it to work is going to help you, you know, get promoted and or, or maybe move on as time goes on, but awesome. So I appreciate your time. Those were great ideas and really good insights. And so, till next time. Thanks everyone.