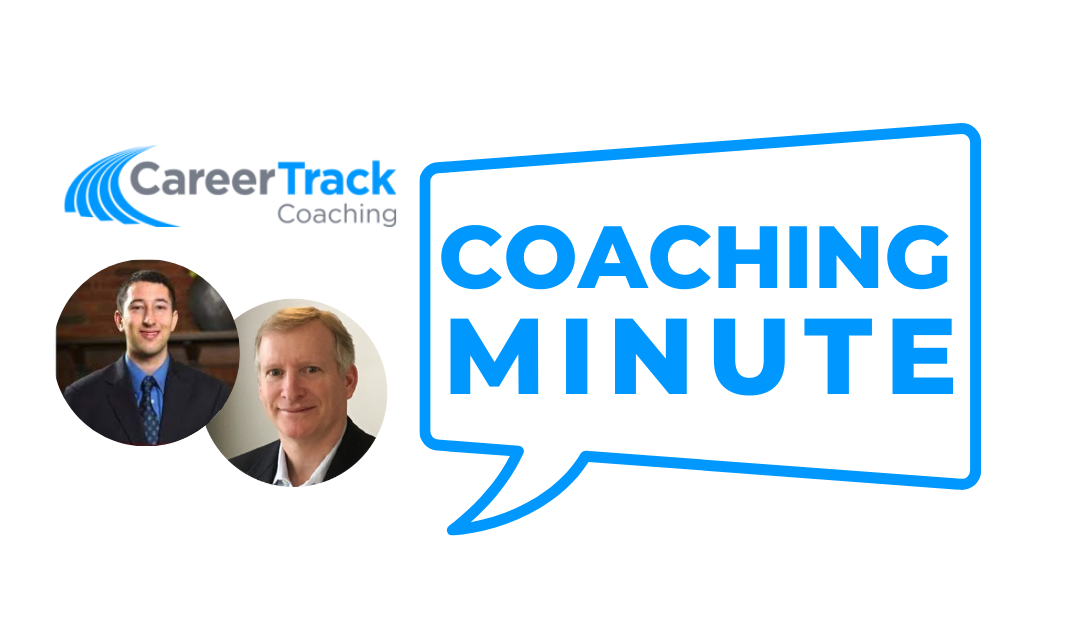 Jim 0:09
Hi, welcome to Career Track Coaching Minute. My name is Jim Frisch. Where we help young adults find meaningful careers through our coaching process. And once a month, we have guests from highly successful businesses where they were, you know, we asked them a couple of questions that we feel would be really helpful to our clients, or young adults. And so today we have Rickey Deutsch, Rickey. Welcome.

Rickey 0:38
Welcome. Thanks. Great to see you again.

Jim 0:41
Yeah, it’s been, it’s been a long time. And actually, I’m excited because Rickey also is a past client. And, you know, I’m really grateful that he’s going to do this today. And so Ricky is an accountant at Klaff Realty. And he helps manage the accounting on the family office side of business, where he specifically manages the books for several entities who are invested in real estate, private equity and venture capital. So for those out there listening, I’m just curious, when you say family office side, do you mind just explaining what that means?

Rickey 1:17
Yeah, sure. So it’s kind of a unique perspective, at least for me, because I wasn’t familiar either before my time with Klaff, but basically, what it’s describing is kind of a business that maybe started in one industry. For us, at least it was real estate focused, as you probably guessed by the name, but what it kind of really dives into is the pivot, the ability to pivot into multiple industries, as you accumulated wealth. And as your business kind of succeeds. So we’ve kind of expanded the nature of our investments,

Rickey 1:52
And because of that, we’ve kind of expanded the number of entities that are exposed to these investments. So hence the name family office. So there’s, you know, there’s family trusts that are associated now, because the company had achieved enough success between 1990 their inception until today,

Jim 2:14
Okay, now, that’s helpful. I appreciate that. So let’s dig into the questions. So the first one is, you know, what advice would you give a graduate that’s just coming out of college today.

Rickey 2:27
So I would say the first big advice that I both learned from Jim and Jodi, at Career Track, but also kind of on the fly, was just, be able to talk about yourself, and try to be comfortable, and force yourself to make mistakes and take risks by reaching out to people and build connections. Because that really is a skill that you will be utilizing for your whole life, your whole career, but also your whole life. Though, I would say early and often try to force yourself to be able to communicate with different people and talk about yourself.

Jim 3:08
Great. Yeah. So summarizing, what you’re saying it’s all about, what you learn, is about networking. Right? Reaching out to people. Yeah. Yeah. So in building those relationships, now, that’s awesome. Because I, I still think, even though you’re gonna apply to the different positions that you’re interested in, if you have a really good network, they’re gonna help you get to where you want to go. And not only now but in the future. So great. That’s a really good one. And then, you know, since you’ve been at your company, a class, what are maybe one or two habits that really helped you with your success there?

Rickey 3:52
I would say one habit that I’ve really carried over, from you guys is building schedules. Whether it’s a day in advance, or a week in advance, or even farther out at times. I think that’s something that really helped me both with networking, but more so now, on my current job, so it’s more about kind of setting aside time slots of each day within a given week, specifically, usually, that way, it’ll kind of put your mind at ease, especially on days like today, Monday, where you’re kind of nervous maybe about all the deadlines you may have for a week. So it allows me to prioritize the different tasks that I need to accomplish, whether it’s in a given day or in a given week, you know, depending on whatever timeline would suit your job.

Jim 4:41
Awesome. Now that and by the way, I’m just curious, do you do end up doing a calendar, an electronic calendar? Do you do like a to do list manually? How do you go about doing that?

Rickey 4:53
I would usually lean towards calendars, just because I’m more familiar with Outlook and That’s our email system. So they kind of have a great calendar system. But we also have a couple of websites that kind of allow us to have an alternative as well. You’re not into calendars, or tasks, whether it’s more long term or short term because everyone’s gonna have different deadlines. No matter what job you’re in. It’s just a matter of how you kind of wants to best organize your different deadlines.

Jim 5:27
Okay, well, you know what, I really appreciate it. Those were some great advice from you. And hopefully I’ll see you soon down the road. And until next time, thanks so much.